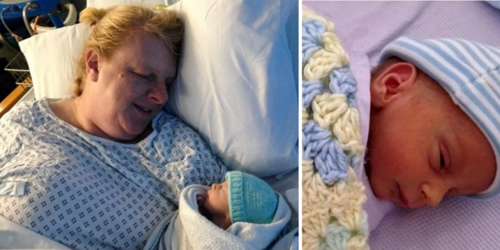 When Louise Warnford met her husband Mark in 1999, she knew they wanted to raise a family immediately away.

Louise, from England, attempted to become pregnant at the age of 32, but her attempts were tragically unsuccessful.

Despite 16 years of trying and 18 abortions, Louise never gave up on her dream, and now, at 48, she is the proud mother of a little baby named William, and she couldn’t be happier. Mark had sperm duct surgery in a previous relationship, so the couple had to resort to costly IVF treatments to become pregnant.

Louise had no trouble conceiving, but the majority of her pregnancies ended in the 14th week. «Every time I had optimism and thought, this is it, I’m going to have the wonderful family I’ve always wanted — I had an abortion and I couldn’t stop crying», Louise explained.

«We began trying IVF treatments, and despite getting pregnant a few times, we always lost the baby».

And just as the couple was about to give up, the doctor discovered that Louise had ‘killer cells,’ which meant that her body was destroying the embryos. Louise eventually received the necessary treatment and became pregnant. Her son William was born via caesarean section in the 37th week.

Motherhood, according to Louise, is “the best job in the world.”

Learn more about Louise’s story and her advice to other couples trying to conceive: