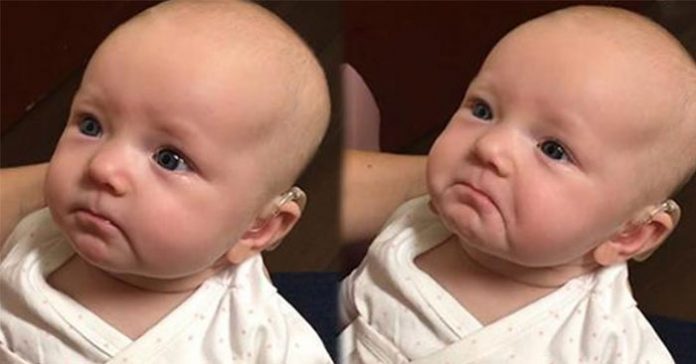 Charly, a two-month-old girl, was born with profound hearing loss. She had never heard her mother’s voice until she recently received hearing aids.

Charly’s mother, Christy Keane, posted a video of Charly saying “I love you” after she was fitted with hearing aids.

Charly became emotional as Christy said “I love you” to her because she was finally hearing her mother’s voice for the first time.

Although she is only two months old, her expression says it all: she adores her mother!

Baby Charly fought back tears as she heard her mother’s voice for the first time.

Everything appeared to be normal when Charly was born. She was a normal baby until she stopped responding to noises and voices. When her parents realized this, they took her for a hearing test, which revealed that her hearing is impaired and she requires hearing aids.

Christy Keane stated that none of her or her husband’s family members have a history of hearing loss. Nonetheless, she was grateful that Charly is a beautiful and healthy baby girl, and that her deafness will not prevent them from assisting Charly in reaching her full potential in life.

«This is shocking news, but it is not depressing news.» This sweet baby is beautiful and healthy, and she is capable of achieving anything she desires in life, which we will ensure.»

«We didn’t think she’d hear anything, so this was more incredible than words can express.» Her implant and language development journey is off to a fantastic start!» Christy stated on Instagram.

The video has gone viral on the internet with more than 222, 000 views so far.

Watch the video here. You might need tissues too.