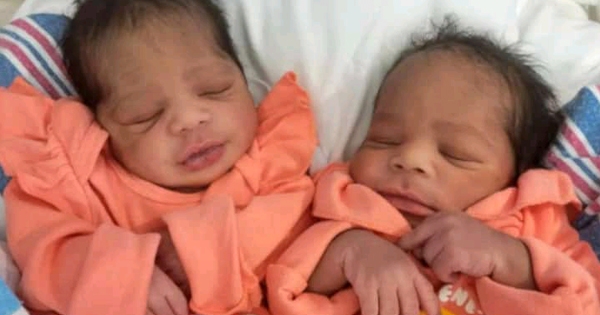 Kimberly Alarcon and her husband, John Alarcon, of Wallkill, New York, have welcomed their third set of twins.
The couple, who have eight children between them, welcomed their bundles of joy at Westchester Medical Center in the United States of America.
The new mother claimed that she was able to overcome various obstacles in order to give birth. Kimberly Alarcon and her husband, John Alarcon, have welcomed their third set of twins at Westchester Medical Center in New York.

The couple from Wallkill, New York, already has eight children, including a three-year-old foster child.

Delivering through CS
For the past 17 years, the couple has welcomed children every three years. They welcomed fraternal twin girls Kenzy and Kenzley recently.

Kimberly delivered the twins through Caesarean section since one of the girls was breech. The twin girls, whose names were inspired by their Aunt Kizzy’s, are doing fantastically well.

“The twins are fantastic. They’re in good health. “I couldn’t have asked for anything more,” Kimberly remarked.

”I experienced hypertension, I fell, broke my ankle, went through some oral surgeries that just I couldn’t even be put to sleep for so … it was just one thing, one hit after another.
”And not only that, I can barely walk with this pregnancy because I carried really bad then I normally would.”

See the photos below: After welcoming quadruplets, a Ghanaian woman becomes a first-time mother.

After welcoming her first daughter at the age of 50, a woman becomes a first-time mother.

Also, a Greensboro-based woman in North Carolina, Dr. Susie Troxler, has become a first-time mom after welcoming her first daughter at age 50.

Dr. Susie and her significant other Tony Troxler, 61, told WFMY News that their fertility journey to have a baby began decades ago.

Dr. Susie started soon after she married her husband Tony in 2008. Speaking to WFMY News about the miracle birth of their baby girl, Dr. Susie revealed that soon after they got married, they thought they’d get pregnant like most people.