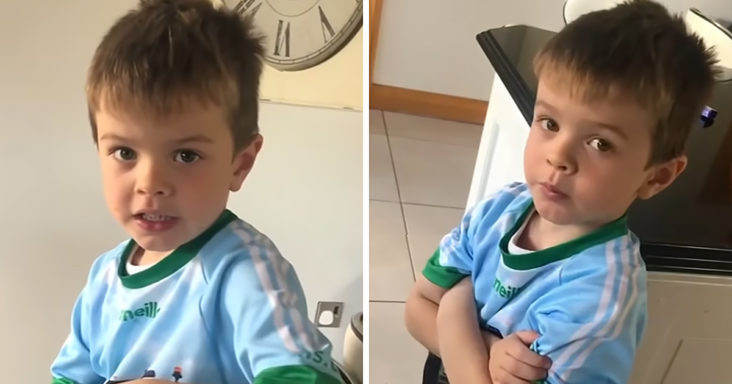 This four-year-old from Northern Ireland says some of the most bizarre things. He makes the decision to inform his mother of his daily chore list. He embellishes the explanation considerably, but it’s all in good fun! Caroline O’Neill’s son Darragh has a big imagination and some real-life experience. Darragh goes over a list of things he needs to do in the upcoming day while his mom patiently listens and encourages him.

According to four-year-old Darragh, he has to get the keys to his car because he just bought it yesterday. He also just got his license yesterday! He says, ‘The police won’t be out today,’ while looking away from the camera, deep in thought. After completing all of his responsibilities for the day, he characterizes himself as a “very busy man.” He’s erecting barbed wire, pruning bushes, obtaining cement, and excavating ‘little drains.’ Darragh must also cut sheep hair!

Because Darragh’s Irish accent is heavy, the subtitles come in handy. He sits at the kitchen table, sipping coffee and making a list of his responsibilities. ‘He loves to work hard and farm the land with his brother, papa, and grandas,’ says Caroline. He’s a hardworking young man.’ Darragh also discusses what he might like for dinner. He lists pizza base or steak with garlic as an option. Then, he goes back to talking about ‘leveling stones’ and ‘mowing the garden.’ He adds that ‘A shower, I’ll maybe do tonight!’

This four-year-old knows how to fill a day with work and good food! His list keeps going on and on. He couldn’t be any cuter as he recites his imaginary duties at his home in Northern Ireland.