It’s not always about training; sometimes it’s just about being human.

Every day, police officers around the world leave their homes and families to protect and serve their communities’ residents. Although it is their sworn responsibility to assist people, the job entails much more than merely playing “cops and robbers.” Police officers are on the job to promote public safety, educate the public, and enforce the law.

Officer James Hurst of Savannah, Georgia was just doing his job when he found himself in a situation where his fatherly instincts, not his cop instincts, kicked in. Hurst is the father of two sons, one of whom has Down syndrome, so he knows how it feels to be small and powerless in a huge, scary world. 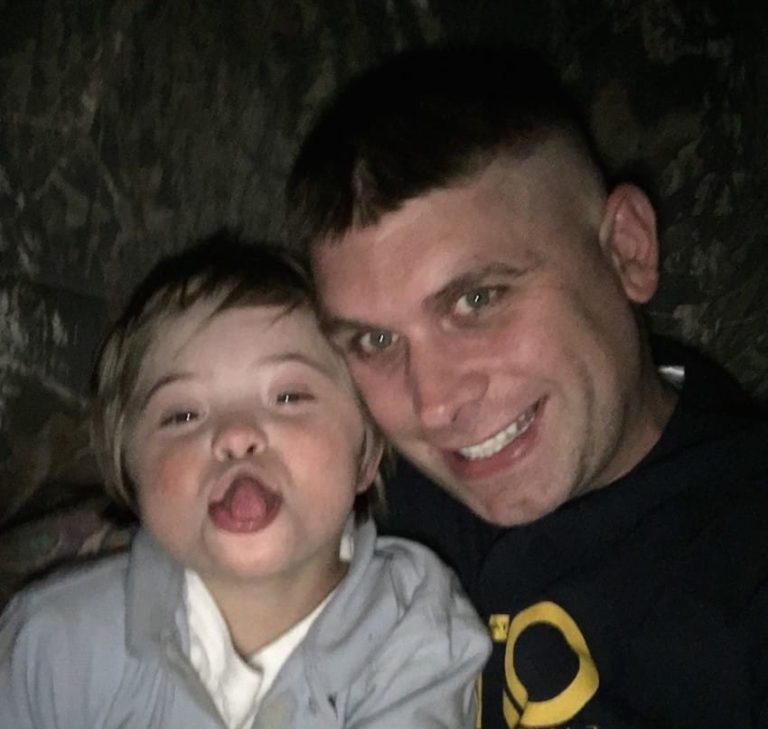 Hurst had just been on the job for about a year when he received a call about a toddler wandering around Savannah’s busy streets. The 16-month-old was understandably upset because his caretakers were nowhere to be seen.

Hurst immediately picked up the young boy and drove him to Memorial University Medical Center’s Emergency Room. After that, the worried cop stayed by the boy’s side as staff personnel examined him. Despite the fact that he was unharmed, the child was afraid and began weeping and howling excessively. 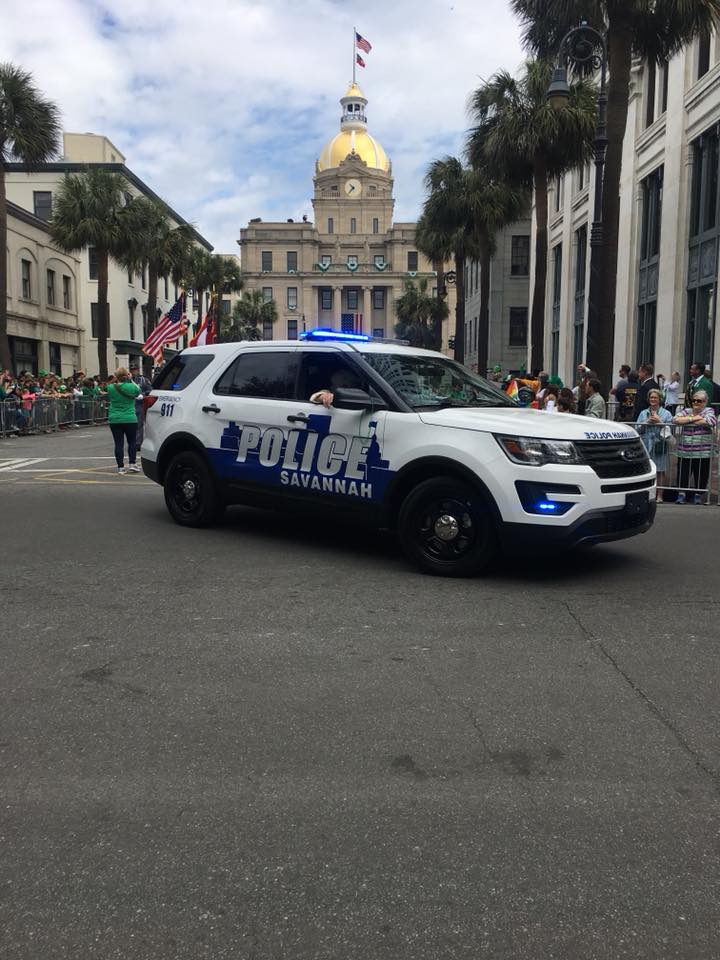 The officer looked around, but there was no one there to comfort the distraught child. So he did what came naturally to him, and what any good dad might do in the same situation: he picked up the crying boy and held him tightly to his chest. Instantly soothed, the toddler’s cries faded from sobs to whimpers, and soon he was nestled quietly against the stiff body armor hidden beneath the officer’s uniform.

“The boy, obviously, being so small, became very upset. He was crying. He was sobbing. I asked the hospital staff if I can hold him to comfort him and soothe him a little bit to try to calm him down, to continue getting medical care, and they said that was fine,” Officer Hurst explained. 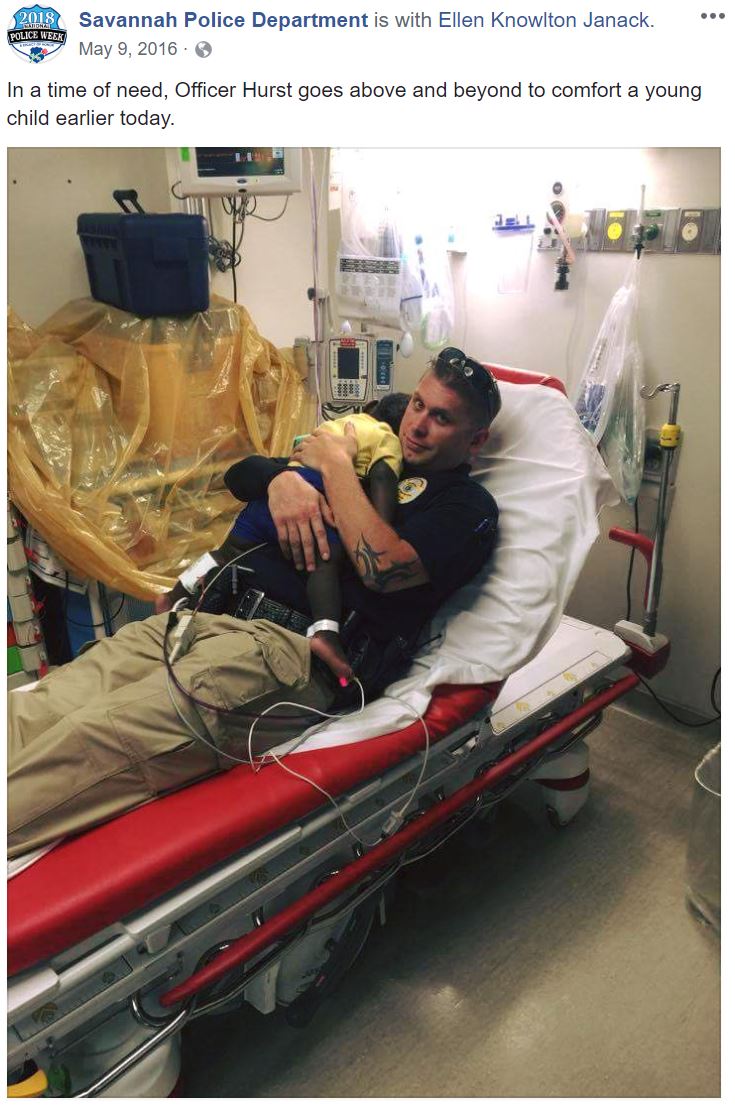 So I picked him up. Minutes later, I was standing and he was asleep on my chest, and with all my body armor and my gun belt, became very heavy holding this small child. So that’s when I decided to sit down on the bed and make it easier for him and me.”

After the Savannah Police Department shared the photo of Officer Hurst comforting the little boy on their social media pages, the image quickly went viral online. Everyone who saw the image praised Hurst’s compassion, yet for him, it was all in a day’s work. 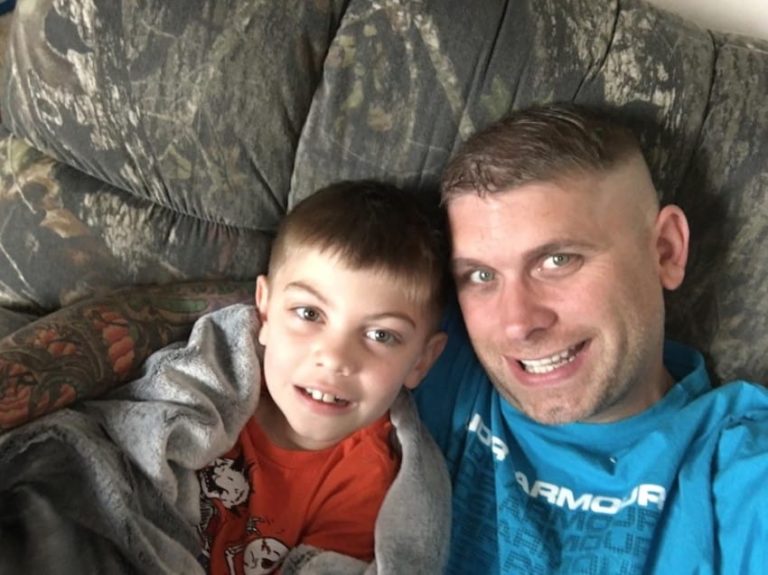 “I just knew this child needed somebody to be there for him,” the officer said. “It was just human instinct; humanity. The hospital staff was taking great care of him [but] he was sobbing and crying. I picked him up and within minutes, he was asleep on my chest.”

This is just another example of the kind of humanity the world needs more of! Thank you, Officer Hurst, not just for your service, but for leading by example.