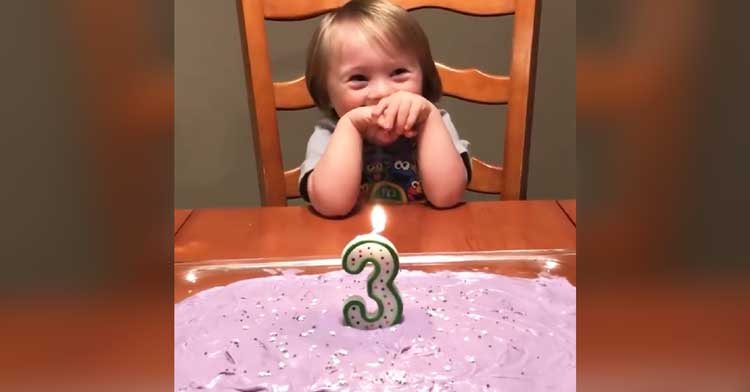 Being the center of attention while people sing “happy birthday” might be difficult as an adult – what are you expected to do for the next 30 seconds? What’s the best place to put your hands? Is it appropriate for you to sing as well?

There are no awkward feelings for three-year-old Rhett Flener. On January 1st, the adorable child celebrated his third birthday, and his parents posted a video that will melt anyone’s heart. Rhett was born with Trisomy 21 (Down Syndrome) and also had to have reconstructive bowel surgery within his first few months of life. Since then, the tot has been in and out of the hospital with illnesses including pneumonia. You’d never know he’s had so many medical issues, though, because the joy in his eyes is impossible to ignore! In the video shared by his parents, Rhett is enamored by his birthday cake – particularly the “3” candle. Then, as his parents start singing, a giant smile spreads across his face before he starts giggling with what can only be described as glee. Rhett’s parents take his cake closer to him and tell him to blow out the candle after the song is finished. He gives it his all and eventually blows it out (with a little help from Dad). Based on how excited Rhett was for the candle, you’d expect the toddler to cry when the flicker went out. Not this kiddo. He only got more excited and cheered with his hands in the air at his accomplishment. Check out the adorable video below – and just try not to giggle along with Rhett! Then, be sure to spread the joy and share this with your friends!