They say a child’s brain is like a sponge, allowing them to absorb a lot of information and abilities in a short period of time. Torin, the small infant in the video, is roughly 16-and-a-half months old, yet despite his young age, he has already learned a great deal. It’s simply incredible.

His father had enrolled him in the “Your Baby Can Read Program” a few months before this video. He also designed new cards to aid with his language learning, and Torin learns one to five new words every day. Isn’t that fantastic? 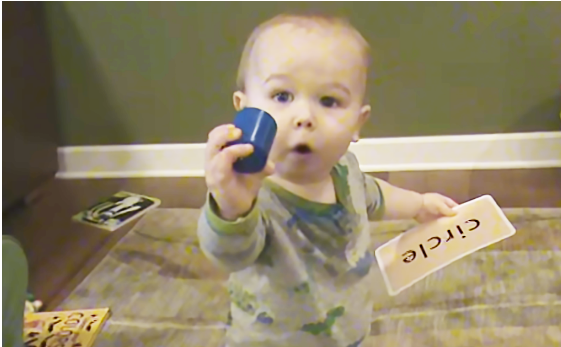 Torin is seen on the floor with flashcards strewn around in no particular sequence at the start of the video. His parents are filming him while requesting that he pick up specific cards. Torin is supposed to pick up the card that says “tree” if they say “tree.” And he always succeeds. There are no images, either. Amazing!

Torin has been concentrating on this work for a long time. Some of the words, such as “orange” and “beetle,” are very tough. These are not easy words for a kindergarten student to learn, so I’m impressed that this 16-month-old can accomplish it.

It looks like Torin and his father are spending some quality time together in the best way possible. Watch Torin’s amazing vocab in the video below. This young fellow is going to be leaps and bounds ahead of others his age, probably for the rest of his life.