Grandma is serenading her sweetheart with “I’m in the Mood,” a classic tune. This song was first released in 1935 and was featured in the black-and-white film Every Night at Eight. Several other performers, notably Louis Armstrong, recorded their own versions of the song. 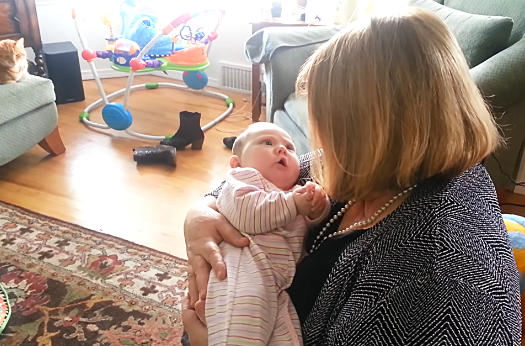 Pay attention to this adorable babe as she stares intently into Grandma’s eyes and even attempts to mirror her pitch. Their duet is just beautiful. Mom dashed for the camera as soon as she saw what was happening. After their initial version, Grandma couldn’t quit laughing. In the video below, you can see this little darling pie’s reactions and hear her singing along with her partner. It’s just cute.

Grandma sits down with the baby in her arms and begins singing to her. She performs “I’m in the Mood,” a 1935 song by Louis Armstrong. The baby’s eyes get captivated by grandma as if it were a magical spell. Grandma is singing in a soothing tone that is ideal for her grandchild. Grandma is so engrossed in her singing that she misses what her grandchild begins to accomplish. This film will undoubtedly be a cherished memory for this grandmother. Let’s hope they spend a lot of time singing together. What a lovely duo they are.