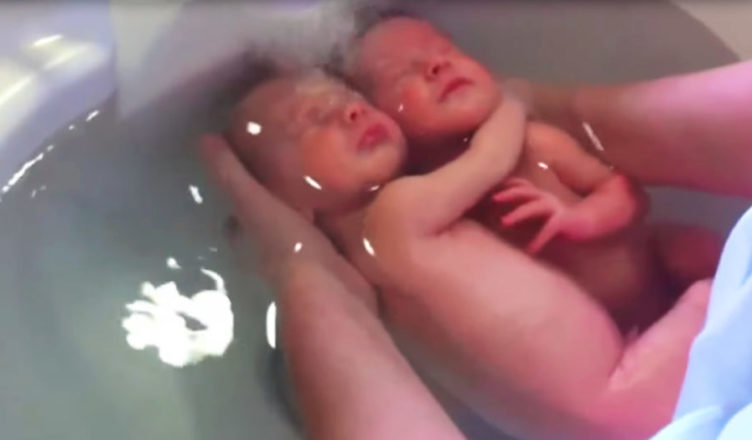 Although the video is brief, it has been viewed millions of times and has struck a nerve with many viewers. “This is the purest thing on the internet,” one person stated, while another wrote, “Wow, it’s really nice to see this.” While viewing, I begin to smile.”

A touching short film of twin babies being bathed with the Thalasso treatment. The first impression (and one that is deceived by the video’s title) is that the two infants have just been delivered and are still being held in some facsimile of the womb to maintain the illusion that they have not yet been born. The truth is less spectacular, yet it still has an incredible influence on a newly born infant.

Sonia Rochel, a French nurse, invented a way to “welcome” newborns into the world by simulating the atmosphere in the womb from which they had just been forcibly removed. “I invented this specific bathing technique that is there to welcome the newborn in complete gentleness,” she says. It’s like a welcoming gift, my present to them as they enter this world.”

Sonia has been working with newborns and young children for almost 30 years, and she has seen many various approaches to birthing and post-natal care throughout that period. “In particular, I met a midwife who showed me many lovely things.” The most essential thing she taught me was that when it comes to babies, we must take our time.

Sonia, on the other hand, is concerned with more than just taking time. She spent a significant amount of time observing newborn newborns and listening to what they were trying to tell us. “As background sounds, we hear a variety of sounds. We hear it, but we don’t truly understand it. So, after suffering through this, I promised myself that I had to do something for these babies.”

Sonia gradually devised the approach presently known as the Thalasso baby bath method based on her findings. As Sonia puts it, “most of all, it’s about shifting the whole idea of a bath so that it becomes less rigid, more about enjoyment than about hygiene.” I’d like to modify the definition of a bath for a baby: it’s not about washing everywhere, under the arms, feet, ears, etc. A bath is first and foremost about taking the time, relaxing, feeling good, etc. and it would be fantastic if we could adopt that as the new definition of a bath.”

Be careful, there is no problem with your speakers and no sound, but I dare you not to be as engrossed in this as the two newborns are. (There’s a beautiful surprise for you at the end of the video, so make sure you watch all the way through.)