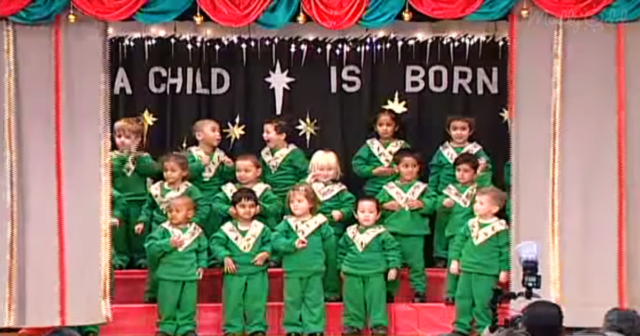 Some songs just draw you in, and you can’t help but sing along, whether you’re in the chorus line-up or in the audience.

It’s difficult to tell whether this Christmas presentation by pre-schoolers from the Saint Elizabeth Child Care Centre in Jersey City, New Jersey was intended for the children or the parents. But one thing is certain: once everything got started, it appears that everyone had a terrific time. The line-up of small children was frightened at first, but they soon began swaying in sync to the music and bopping to the catchy Christmas song, “Rockin’ Around the Christmas Tree.”

They quickly caught on, swinging their small arms in the air as their dance progressed. Many of the naughty youngsters began singing along with much hilarity, clearly having a good time. Their big, happy grins stole the show once they got going.

“Rockin’ Around the Christmas Tree” is a popular Christmas song written by Johnny Marks in 1958 for Brenda Lee, a 13-year-old vocalist. From the age of ten, she was a musical prodigy and singing sensation. This song was an instant hit for her, and it rapidly became a festive season favorite. It appeared in the 1990 film “Home Alone,” when Kevin used it for his phony Christmas party – do you remember? You may see it again on Netflix. After all, it is Christmas.)

Watch the video to witness the kids finish with a bang, great smiles, and all their little arms hoisted high above their bright, happy little faces. When you find yourself singing and bopping along with the melody, you will feel the Christmas spirit.